Planning for Foreshore Projects in B.C.

Get In Touch With Us

Here in the southwest coast of BC we are surrounded by water, from glacier-fed streams to beautiful lakes, endless rainy days to the Pacific Ocean that borders us to the west. In order to support the highly-sensitive marine habitats, our bustling west coast needs to be maintained through well-planned foreshore projects. At North Construction, we are passionate about undertaking environmental improvements that continue to enhance and create clean, healthy ecosystems right here In our backyard. That’s why we are proud to be a leader in foreshore projects in British Columbia.

Planning for marine works takes extreme coordination and precise timing. “With any foreshore remediation project there is a large element of risk to the environment, so you need to be well prepared,” says Joel Markson, Director of Planning and Logistics for North. “You need a lot of pieces to come together seamlessly to have the job be a success.” For starters, most work can only be completed during a seasonal window that usually runs through the summer and early fall months. Then, the temperate west coast weather must cooperate; a rainy, windy, foggy or snowy day means that helicopters or barges are unable to operate.

Over the past 20 years, the team at North Construction has developed extensive experience in foreshore works, having successfully completed a large number of some of the more challenging barge access projects in the area. Our team goes to great lengths to ensure that marine remediation work of any scale – from small jobs clearing debris at the mouth of a creek to building large areas of new habitat – are completed in the most efficient, safe and cost-effective manner. North has a mission to deconstruct, recycle, and reuse as much of the material as possible to minimize environmental impact. Our goal: to enhance the environment and leave it in a better state, so that the natural flora and fauna not only survives but thrives.

This fall, the team at North Construction was contacted by a local engineer and biologist to assist in the rebuild of a preexisting seawall that had been undermined and failed during a severe storm combined with a king tide event. As a result of the harsh tidal, wave and weather conditions, part of the wall failed, broke, and fell into the ocean. The broken portion was removed, a new cast-in-place wall reinforced and built on a large, stable footing. The same granite rock from the original wall was then reused to rebuild the outer facing portion to maintain the masonry-style look. The result was a seamless, natural-looking barrier designed to withstand future tidal and storm forces. 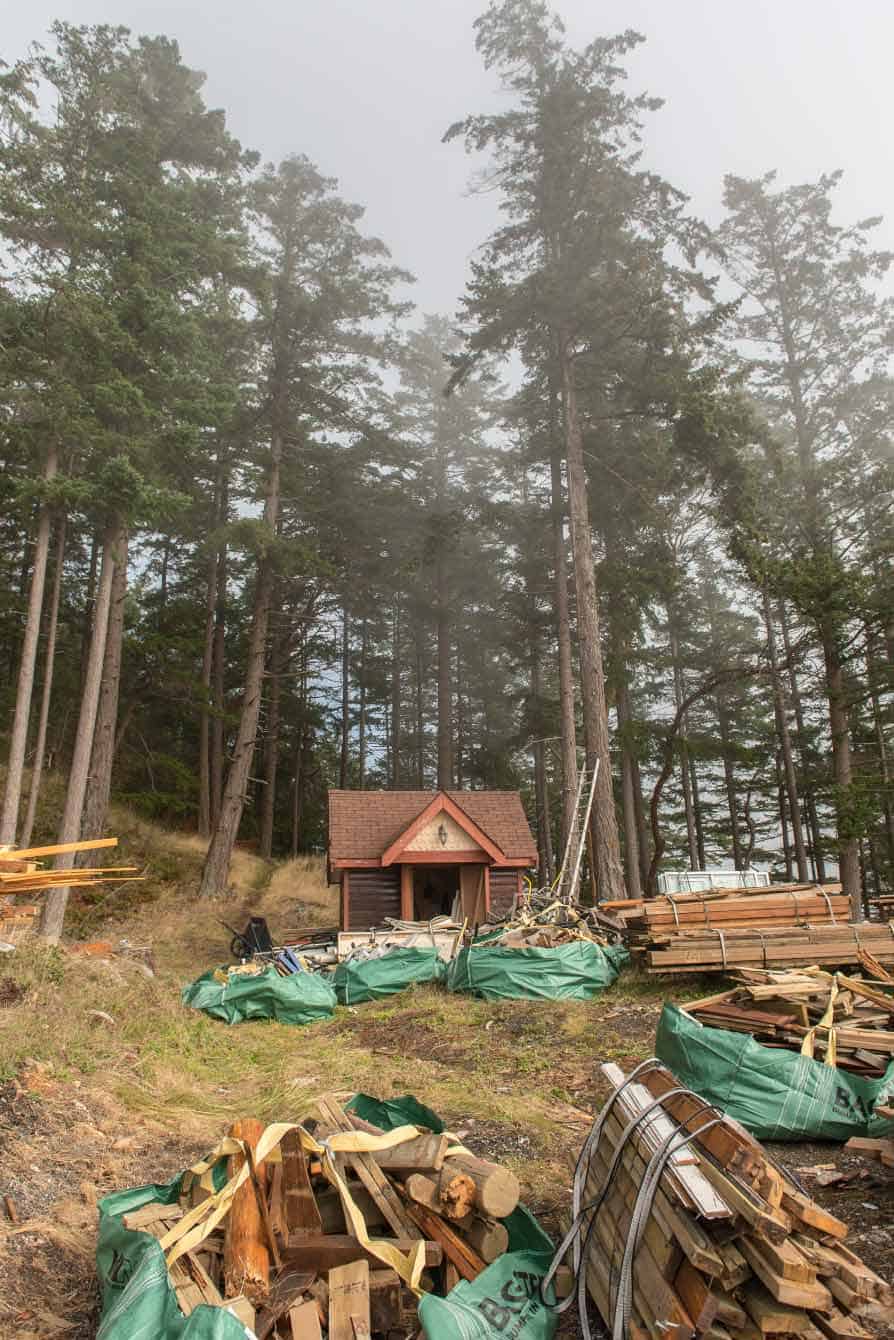 Dorman Point is formerly privately-owned land on Bowen Island that was recently purchased by Metro Vancouver. Their objective was to return the land back into a natural park with no evidence of past human occupation. Located on a landlocked peninsula with no overland access, the existing house, outbuildings and structures that needed to be deconstructed and removed were only accessible by hiking in or climbing more than 50 stairs from the shore, which our crew did every day. To get the heavy equipment and tools on site, however, the North team required creativity and forethought. Using their extensive experience working with helicopters for longline operations, all materials onsite were broken down to bundles of flyable weights and flown onto a stationary barge on the shoreline. The excavator required for the job was disassembled into four x 6000-lbs sections and, utilizing a larger heavy lift helicopter, was flown onsite to be reassembled by our field crews. All the deconstructed material was then airlifted into bins on the barge and transported back to the mainland, the majority of which was recycled. Now completed, the residents of the Lower Mainland have another spectacular natural landscape to enjoy. 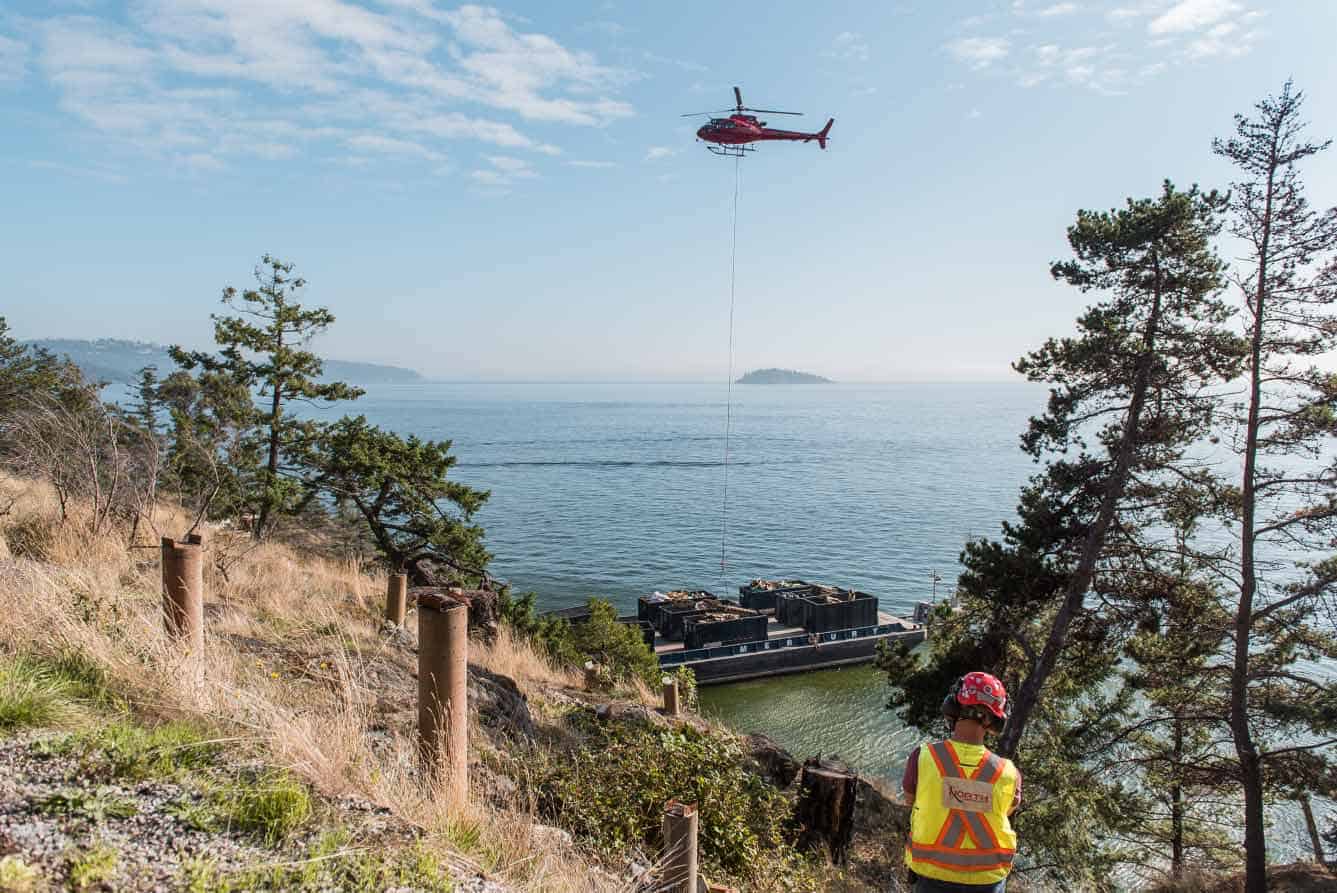 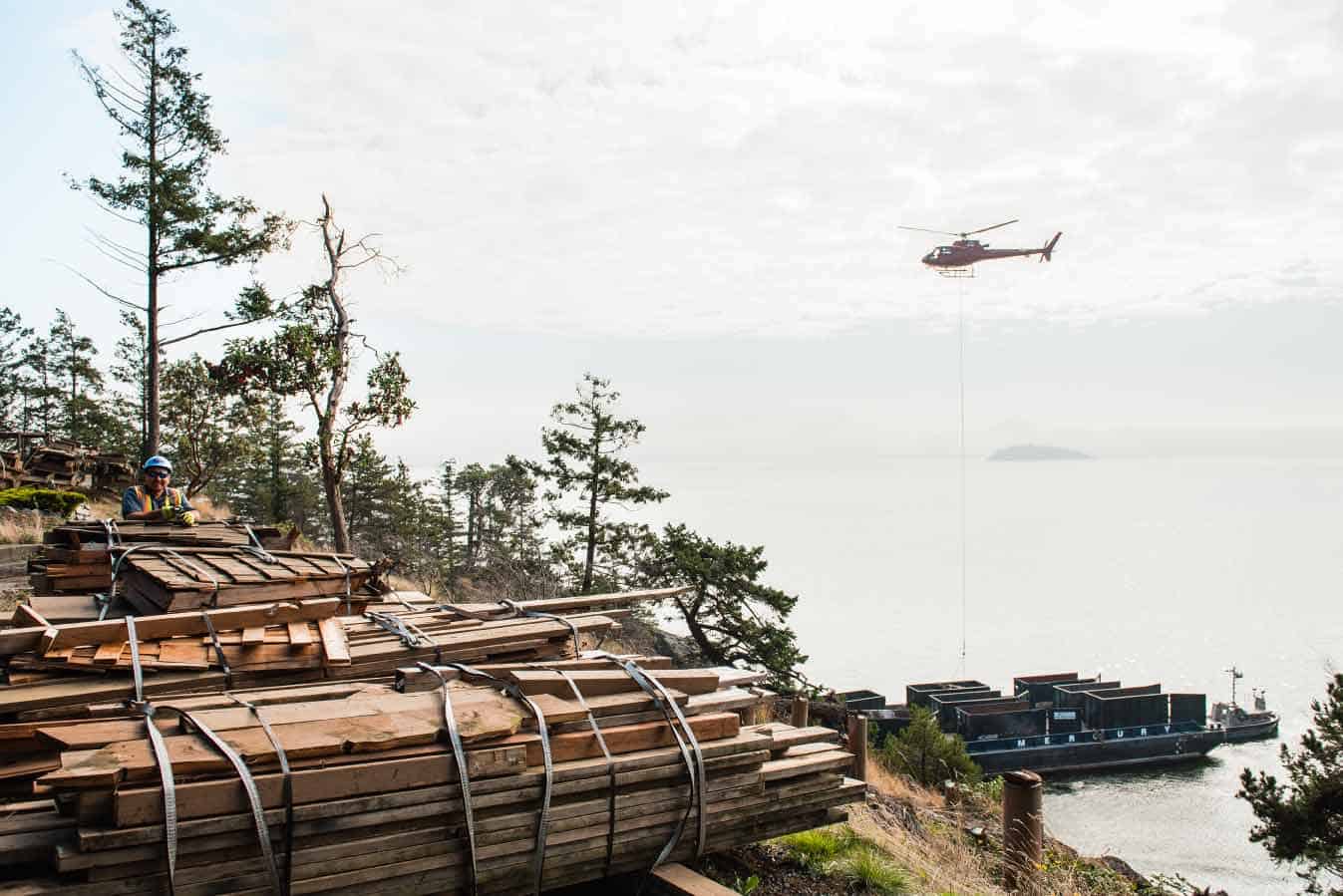 We Build It RIGHT